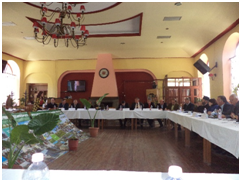 At the Hotel Akademia in Voskopojë was held the meeting for the DE project in Voskopoja with the theme: “The Balance 2007-2012 for the integrated development of the territory of Voskopoja. In the meeting was present DE project repsresentative, Mr. Stefano Calabretta, Jean Charles Derongs – FERT, Mayor of Voskopoje Mr. Nexhip Bacelli, Chairman of the Qark Council in Korça Mr. Landi Gushi, representatives of the prefecture, DB Korçë, DMK Korçë, Fan. S. Noli University, Voskopoja Renaissance, FZM Korce, GIZ, ProMali, DMO, representatives of ADAD Malore, residents of Voskopoja, tourism, agriculture, and heritage actors operating in Voskopje, etc. The Executive Director of ADAD Malore Mr. Domi Hafuz, made a five-year balance of the project, objectives, actions and achievements in three sectors of agriculture, tourism and heritage, where revenues increased by 75% at the end of the fifth year of the project. By all stakeholders and especially by Stefano Calabretta and Qark of Korça, the project was deemed successful and dynamic and Voskopoja represents dynamic and sustainable development. At the end of the meeting, Mayor of Voskopoja, the European Delegation and FERT were awarded with gratitude certificates. The event was followed by a festive lunch.